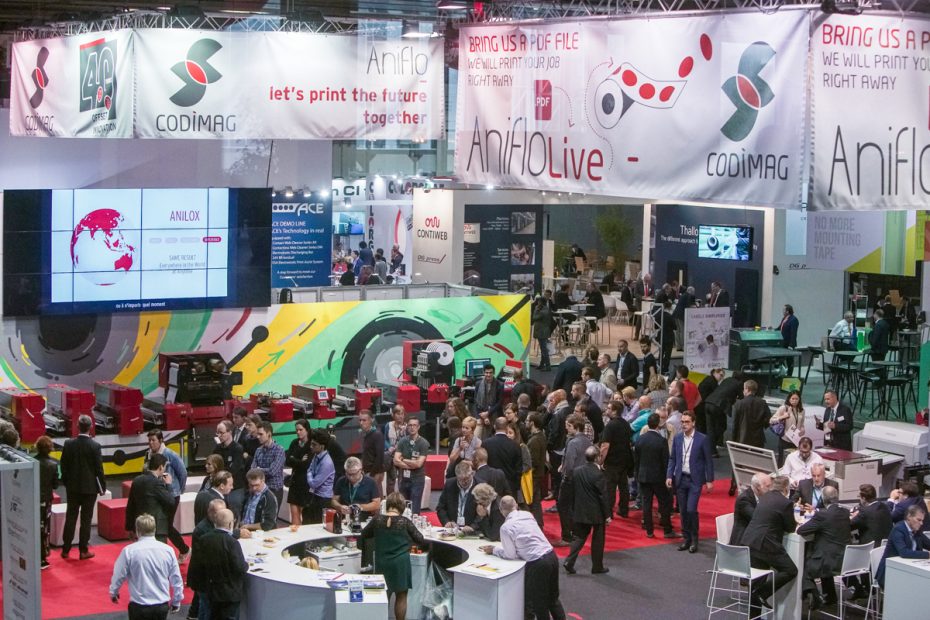 Bondoufle, France, 4 October, 2017: Label press manufacturer Codimag reported significant interest in its Aniflo-based VIVA 340 Evolution printing lines and pre-press workflow at Labelexpo Europe 2017. Several deals will be finalised in the coming weeks after a show which saw multiple live demonstrations of the technology, requested by printers for various retailing applications.

In the “AnifloLive Experience” at the stand, Codimag provided over 30 exclusive appointments where converters could submit a PDF label file to observe their design being processed and printed within 30 minutes in an automated workflow that includes colour management with Esko Equinox software, colour proofing, plate-imaging, and press makeready.

According to Codimag’s managing director, Benoit Demol, it is thanks to these demonstrations to converters from Europe, Asia, Africa and the Americas, that Aniflo’s versatility as a premium label printing technology is being fully understood:

“Labelexpo Europe 2017 has been a breakthrough moment for Aniflo technology. The process has already established itself as a high-value technology for wine labels,” he said. “Through our live demonstrations on the VIVA 340 Evolution press, label printers in consumer goods markets including food, beverage, cosmetics and household chemicals had a real-time appreciation of the technology’s competitiveness for short and medium runs. Aniflo impressed visitors with its capacity for immediate and precise register and colour-matching, extended gamut, fast prepress times and printing speeds. Many were also astounded that semi-rotary technology, on which Aniflo is based, can be set up in less than 10 minutes and reach speeds of 75 metres per minute, making it productive as well as economical on tooling costs.”

AnifloLive was not only an opportunity to test a print process during the show, but all participants were entered into a lottery to win an electrical bicycle GIANT QUICK E +. The winners were Bratislava, Slovakia-based label converter Purgina.

Radovan Kilarsky, marketing and business development manager, Purgina, commented: “We were excited to have the opportunity to test Codimag’s Aniflo Evolution press during Label Expo 2017. We saw the entire workflow from data processing with the Esko Equinox module to simulate a job with three spot colours. The prepress and job setup was quick and, with its high level of automation, easy to operate. Aniflo Evolution showed short setup time excellent quality and great productivity. I believe ultimately the low running costs and high flexibility compared to digital presses are far more efficient for the label printer.”

Benoit Demol added´: “Codimag VIVA 340 presses are bespoke configurations built to the customer’s application requirements. We are concluding the specifications for several customers following meetings at the show, and we expect to make a number of agreements with others in the coming weeks.

“Finally, it is pleasing to see interest for Codimag coming not only from converters, but also from many partners or agents in new markets. They understand the benefits of our Aniflo breakthrough technology for their customers,” Demol concluded.

Aniflo combines offset quality, flexo simplicity and digital flexibility. It features an offset unit, with offset plates and a simple anilox delivery system that brings a uniform ink amount across the web. With low operational costs, Aniflo is an economical choice for high-definition quality short and medium runs on any commonly used label substrate – filmic or paper. Plate costs and imaging times are very short: all plates for the press can be prepared within about 15 minutes. Because it is intermittent, fewer consumables are needed, making Aniflo suited for short and medium run work. The high definition capability and superior stability means Aniflo can print in extended gamut, offering over 90 percent of the PMS colours without any need for ink changes and consequential washing.

For 40 years, Codimag has designed, manufactured and sold printing presses with high added-value at its facilities in Bondoufle, France. Today, it is the world leader in intermittent waterless offset label printing. Codimag offers solutions tailored to label printers’ needs with a high level of innovation, both in terms in technology and application, making its presses productive and cost-effective for many different markets. With a worldwide network of agents, Codimag is able to take its technologies around the world, and support its customers in a profitable, long-term relationship.